This post estimates the direction of the rocket trajectories, by analyzing the impact sites in Zamalka.

This impact site has a rocket dug into the ground which was investigated by the UN, and which they believe was undisturbed. The UN visit to the site is well documented (Video 1, Video 2, Video 3), and seen in this photo:

This location was accurately identified here.
The video below shows the rocket from several directions, and it is clear its angle with the wall is 60-70 degrees: 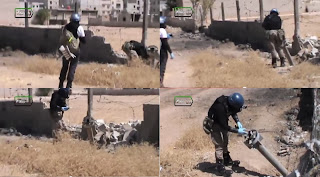 Drawing a 60-70 degree angle to the wall on a satellite image gives us a northern trajectory (The red trajectory is what the UN mistakenly reported). 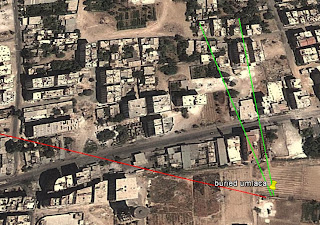 This site was matched to a location 100 meters east of site 1. This photo of the site (and more here) clearly show the crater is oriented at a right angle to the plough lines: 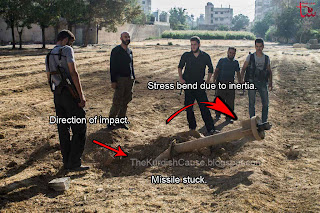 Placing this on the satellite image gives us another northern trajectory: 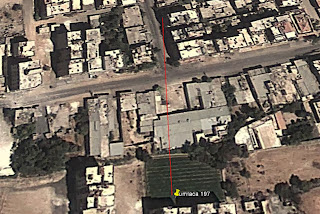 
This site is a direct hit to a building, examined by the UN investigators in the following video:

At minute 1:40 we see the impact hole at the northern wall and no signs of an angled impact. At minute 1:28 a shadow line is seen, indicating sunlight is coming from behind and slightly to the left. In this video the team is seen exiting the building from the other side. At minute 2:11 shadows are seen on a balcony in the background: 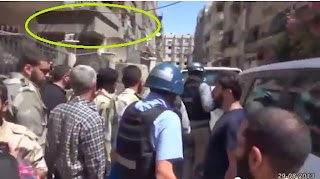 These confirm the angle of the sun as coming from behind and slightly to the left of the impacted wall (which is on the opposite side).

Based on the UN report (Page 26) this visit occurred at August 29th 13:35. Since the sun at that time was at South-South-West, this means the balcony is facing north, and providing us a third indication of a northern trajectory.

Conclusion: The rockets were launched from a location north to Zamalka.
Posted by Unknown at 1:40 AM