First, thanks for publishing it. The more opinions and evidence we gather, the better our analysis will be.


Dan generally agrees that the sarin used in Zamalka was of low quality and lacked stabilizers. However, he believes this is not the result of underground manufacturing, but rather a result of Syria having a chemical program similar to the one Iraq had during the Iraq-Iran war. Specifically:
Sarin's main precursor (Methylphosphonyl difluoride) is produced at low purity and stored without stabilizers. When the need comes, it is mixed with isopropyl to create sarin, poured into the munitions and quickly shipped to the battlefield, before it degrades.

He believes Syria chose this process due to the technical difficulties of producing high purity sarin, which he bases on the following claims:


Additionally, he believes the opposition could not have produced the amounts of sarin used in Zamalka (several hundred kg), for the following reasons:


All of these claims are incorrect or irrelevant.


Claim: The US and USSR took years to reach high purity (implying Syria's product would be of low quality).

Response: Comparing a modern chemical program to ones started over 50 years ago is meaningless. Lab technology is far more advanced and know-how has dissipated. In any case, even back then the US and USSR were able to reach high purity within a few years. Why would the Syrian program not reach this ability after 30 years?

This is a misunderstanding of Iraq’s program. Iraq developed agents to be used immediately in the battlefield. They therefore focused on quantities rather than shelf-life. A few relevant quotes:


“While the purity of nerve agents produced were effective enough for immediate use on the battlefield during the Iran-Iraq war, they were not suitable for long-term storage”.   (Source: UN report on Iraq’s chemical weapons)

"The short shelf life of Iraq's nerve agents was not a problem during the war with Iran, because Iraq's CW manufacturing facilities were able to produce large quantities of agent shortly before it was to be used in battle".   (Source: Declassified CIA report)

“Although the Iraqis could have distilled their sarin to remove the excess HF, they chose not to do so because the batches of agent were intended to be used within a few days”.   (Source:  A U.S. Congress, Office of Technology Assessment report)

"CIA analysts believe that the shelf life problem was only temporary and that the Iraqis can now produce unitary agents of sufficient quality by adding a stabilizer or improving the production process".   (Source: The same CIA report)

Syria, however, has a completely different goal. Their chemical program is intended to counter Israel’s nuclear program. It therefore requires long-term storage and quick deployment of large quantities. A “just in time” mixing operation imposes a significant bottleneck which limits the amount of agent that can be deployed in a short time frame.

And indeed, Syria is generally believed to have large stockpiles of operational binary warheads and “a high level of know-how in the chemical weapons technology” (source: French Intelligence Report). As early as 1991 the US estimated that “Syria has an advanced CW program. The program has concentrated on developing sarin in two binary-type munitions: 500-kg aerial bombs and Scud B missile warheads” (source).

The only reason one would be forced to assume that Syria’s program is based on this non-standard “just in time” binary process is to justify why the rockets used in Zamalka don’t have binary warheads (evident by the rockets not having slanted fins or multiple nozzles, which are required to spin the rocket and mix the agents in-flight). When accepting that Zamalka was an opposition attack, these unlikely assumptions are no longer needed.

Last, the claim that Iraq’s program was bigger than Syria’s is not backed by evidence. Syria’s program is active for over 30 years with access to current technology, while Iraq was a 10 year program that ended 20 years ago.

Claim: The last underground attempt to manufacture large amounts of sarin (Aum Shinrikyo) was unsuccessful despite large investments.
Aum Shinrikyo indeed developed only around 100 kg of sarin in a year and half, while the Zamalka attack required several 100 kg’s. However, the Syrian opposition has several advantages over Aum Shinrikyo:
Furthermore, Aum’s big investment was in a plant intended to produce 2 tons per day. The opposition does not need such a large plant to carry out the attacks documented so far.

Claim: "The US OTA study estimated that you needed at least $10 million in 1993 USD to get a basic setup going"

This quote was taken out of context, without providing a link to the source (source here). The full quote is:


"Arsenal for substantial military capability (hundreds of tons of agent) likely to cost tens of millions of dollars”.

This capacity is 100 times larger than what the opposition requires, and assumes military-grade quality, which wasn’t the case in Zamalka.

Additionally, this estimate is not only in “1993 USD”, but also in 1993 technology. As described above, lab technology has advanced significantly since then.

Last, it is very possible that the opposition’s plant was not built from scratch but was rather based on a captured chemical plant. Significant work would still need to be done to convert the plant to produce sarin, but it would be much easier and cheaper than building a new one. We know of at least one captured plant.

It’s hard to give an accurate estimate, but when considering all the factors above, it won’t be surprising to find that the whole operation cost less than $1 Million.

Claim: Using this investment to produce conventional weapons would be much more efficient, or in his words: “Thirty million dollars buys a lot of conventional equipment that is much more immediately useful than a few tons of Sarin.”

Besides the cost estimate being greatly exaggerated, this analysis assumes the weapons were intended to be used exclusively against regime forces. When considering the US red line, the value of a well-executed false flag attack becomes obvious: The US could win the conflict for the opposition within weeks, like it did in Libya. This would make a sarin plant the best investment possible.


Besides none of the claims holding up to scrutiny, the theory fails to explain why the opposition has been ordering large quantities of chemicals only relevant to sarin production. Were they risking arrest and spending money without having a laboratory that can process them?

Probably the most important aspect that Dan doesn’t address at all is the specific nature of impurities found in Zamalka. These can give us important insights into the production process. Most notable are the following two findings:


So the scenario proposed by Mr. Kaszeta requires us to believe that:
On the other hand, the alternative explanation only requires us to assume that one opposition faction decided to try to meet the US red line and potentially win the war, by making a modest investment.

Analysis of Amount of Sarin used


I will also take this opportunity to respond to another report by Dan Kaszeta, which raised doubts as to whether the number of rockets used in the attack is sufficient to cause the number of casualties reported. The calculations are based on several incorrect assumptions, but most importantly it uses data tables that assume an attack on prepared troops who wear gas masks within 15 seconds ("Based on... 15 second masking time"). This was obviously not the case in Zamalka, where sarin was inhaled by victims for a 50-100 times longer period. The longer exposure time is more than enough to account for the gap in Dan's report, making 5-12 rockets of 60 kg sarin a sufficient explanation for the number of casualties reported.

This section contained an off-topic discussion of the public debate. Now that it is no longer being discussed, I removed it.


This is a process that starts with the most basic chemicals. It was found to be consistent with the chemicals ordered in Turkey, and the by-products found by the UN. In an advanced program, the first steps could be skipped by starting with more complex chemicals.
Diagram copied from this analysis of Aum Shinrikyo's process (starting from step 2 above): 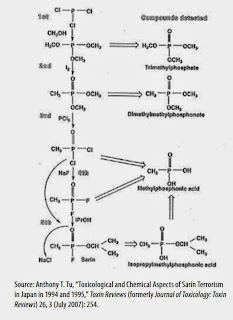 Thanks to DDTea for his contributions in analyzing the UN’s chemical report.