On August 21st the world woke up to horrifying images of a chemical attack against civilians in Syria. Over time the details emerged: Rockets with sarin filled warheads landed in rebel-held residential areas, killing hundreds and injuring thousands. However, one crucial detail remained unclear: Who carried out the attack? Each side naturally blamed the other, with western intelligence agencies providing evidence supporting the opposition, and Russian intelligence supporting the regime. Both sides issued biased reports with cherry-picked evidence, only adding to the confusion.

This blog was created to counter these disinformation campaigns, by providing an open online collaboration platform to investigate who is behind the attack. It turned out to be very successful with dozens of contributors meticulously documenting and analyzing thousands of pieces of evidence. Due to the sensitivity of the matter, high standards were enforced: Only reliable evidence verified by multiple sources may be used. No unverifiable statements from a single source, no generous interpretations of blurred images, and no cherry-picked circumstantial evidence.

This post summarizes this effort and provides the final conclusion. It should not be read as an opinion piece that tries to promote a certain point of view by choosing convenient evidence and making unsubstantiated claim. It is the result of a ground-up process that started by meticulous collection of all relevant evidence (regardless of what theory it supports), scrutinizing each item, and examining which scenarios can best match the evidence. At the end of the process only one scenario was found plausible. It is presented below in a hierarchical structure that allows the reader to independently verify every statement: Just follow the links and you will always reach hard evidence: a video, an eyewitness report, a mathematical model etc.

The only plausible scenario that fits the evidence is an attack by opposition forces. Following is a description of the main findings, with each one linked to the evidence that backs it.

This section provides background information on the attack that is not directly related to culpability, but is necessary for understanding the rest of the evidence.

On the night between August 20th and 21st the regime launched a wide scale attack on the Ghouta area.
On the same night, rockets with large sarin warheads (hereinafter “UMLACA”) landed in Zamalka, an opposition dominant residential area, killing hundreds.

This section contains findings which are directly indicative of a rebel attack.

The attack was launched from an opposition-controlled area 2 km north of Zamalka.
The sarin was of low quality and contained impurities that indicate it was likely produced underground and not in a military plant
A video leaked by an anonymous source associates Liwa Al-Islam (a Jihadist rebel faction) with a rocket attack that is likely related to the chemical attack 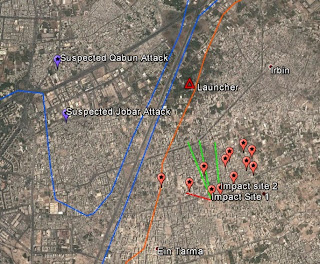 Map of the attack:
Red triangle - Likely source of the attack.
Red pins - UMLACA impact sites in Zamalka (with calculated trajectories in greeen).
Purple pins - Areas reported to have been attacked by UMLACA in the Liwa Al-Islam videos.
Red line - Border between rebel-held area and contested area, according to Wikipedia's map.
Blue line - Border between contested and regime-held areas (i.e. Qabun and Jobar are contested)

Despite the strong primary evidence, the rebel-attack scenario could not be accepted without answering the following questions:

While manufacturing sarin is a task within the capabilities of such groups, developing a rocket with an effective chemical warhead is fairly complex. Stealing one would also be very difficult, since Syria’s chemical weapons are heavily guarded. However, it turns out that the UMLACA was originally designed as an incendiary weapon, and not a chemical one. The opposition could have easily captured a stock of these incendiary UMLACAs and refilled them with sarin.

While the evidence for a rebel-attack is very strong, we must also verify there is no strong evidence to support the competing regime-attack theory. This section lists evidence which was used in the past to imply regime culpability.

Western intelligence agencies claimed the attack spanned a large area and was therefore beyond the capabilities of the opposition.
Human Rights Watch found that two rocket trajectories reported by the UN (one in Moadamiyha, one in Zamalka) intersect at a large Syrian Army base.
The UN reported chemical stabilizers were found in the soil samples, indicating a military source.
The US reported rocket launches from regime-held territory 90 minutes before poisoning reports flooded social media (i.e. 1:00 AM).
US and German intelligence claimed to intercept calls confirming regime culpability.

A former Syrian officer claims that he was in charge of chemical warfare, and was ordered to use chemical weapons.
The US and UK intelligence claimed Syria has used chemical weapons on a smaller scale on 14 occasions.

This section lists evidence that was claimed to support the rebel-attack theory, but was found to be unreliable. Although not relevant to evaluating this scenario, it is provided here to demonstrate the neutrality of the evidence analysis process.

Local activists admitted that the poisoning was a result of an accident involving chemicals brought from Saudi Arabia.
Hostages have overheard a Skype call in which rebel commanders admit the attack was a rebel provocation.
Full details and more cases here.

To reliably determine culpability, evidence should be accompanied by a motive. Two possible motives were found plausible:

Targeting Mistake
The Liwa Al-Islam videos indicate that the sarin UMLACAs were intended to be used against regime forces, and the launches are probably in response to the regime attack that started earlier. The attack on Zamalka may therefore have been the result of a targeting mistake – either in azimuth calculation, or in wrongly identifying Zamalka as regime territory.

False flag
Another plausible explanation is a deliberate attack on an opposition neighborhood, in attempt to meet the US’s red line for intervention. This could possibly be an unauthorized decision made by the chemical rocket team.

Besides demonstrating the high likelihood of a rebel attack, the research also exposed the implausibility of the regime attack scenario: To believe that the attack was carried out by the regime, one would need to assume the following:
Detailed discussion and other regime-attack scenarios here.

An analysis of all evidence relating to the August 21st chemical attack indicate it was carried out by opposition forces. According to the most likely scenario, they used looted incendiary rockets, refilled them with sarin they manufactured themselves, and launched them from a rebel-held territory 2 km north of Zamalka.

The evidence was presented above in a unique structure that allows the reader to independently verify every claim. The purpose of this structure was to make sure that you, the reader, can reach one of three mindsets:

Many thanks to all the contributors. Amazing work!
Members of the media wishing to publish the report, please email sasa1wawa@gmail.com.
Posted by Unknown at 9:29 PM