The location seems like a perfect match to Qadam railway station. This image shows the location of the camera and the apparent launch direction - 100 degrees (East). 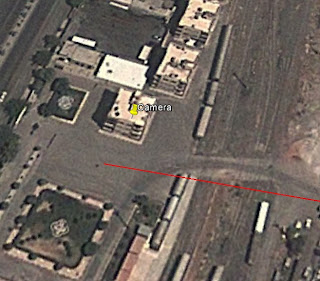 The video gives the most accurate evidence so far of the conventional UMLACA's range, being launched here at a distance of 1.9 km (details here).

Following 1.9 km in that azimuth falls between an area marked as "Palestine camp" and the Al Tadamoun neighborhood, both marked here to be under rebel control. Al-Tadamoun is often mentioned as the site of clashes between government and rebel forces.

At 1.9 km and 101.3 degrees there is a large industrial building there, which might have been the target.

Some of you may remember we've already seen an UMLACA launch from Qadam station (this is very likely the larger version of the UMLACA - see discussion in comments):

Overall, an interesting finding, which agrees with our previous estimates. Thanks Mark/HRI!

Going over all the videos related to the Qadam station indicate it is under government control, and frequently attacked by rebel forces. A major attack occurred on January 27-30th, 2013, which resulted in rebel forces capturing at least part of the station. It is documented in the following videos:

Shows forces carrying the ISIS flag fighting in this area to the south of the station.

More fighting in the same area, and then capturing a few buildings inside the station (probably these).

This seems to be deeper inside, not clear where exactly.


This video is said to show regime jet shelling in the exact locations found above.

Update: In a comment below Charles Wood points to another video showing rebels inside the northern part of the station.

This brings up an interesting scenario: We have strong evidence of UMLACAs with incendiary warheads falling in Darayya a few weeks earlier (most likely launched from the nearby Mazzeh airport). Since we already know Qadam station is an UMLACA launch site, it is definitely plausible it too had incendiary UMLACAs and a launcher stationed there during the opposition raid. They could be the ones later repurposed to carry sarin and used on August 21st (as described here).
This is of course mere speculation, but it does provide a plausible example for the "captured UMLACAs" theory.