In this post I will analyze all documented uses of the UMLACA, and assess what is its purpose. This post builds on the great analysis of the UMLACA done by Brown Moses and others, and assumes the reader is already familiar with it.

Brown Moses lists the following six UMLACA attacks:
Additionally, I was sent a video of an UMLACA attack from Mezzeh to Daraya in December 2012, using a conventional warhead.

Let's examine these one by one.

Item 3 was already identified as a conventional High Explosive warhead.

Item 4 (Yabrud) seems unrelated. When examining the video closely it does not seem to be an UMLACA, for the following reasons:


I believe this is a machinery part that is not meant to carry any payload. It was probably found in the vicinity of a bomb crater and was wrongly associated with it.

Next, let's examine Item 1 - the Daraya attack. It is documented in the following videos and images: 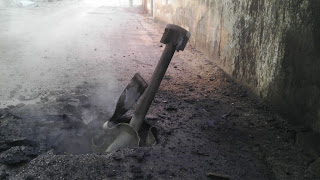 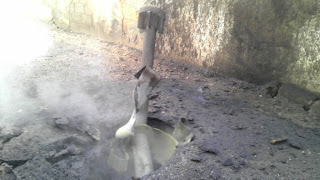 The white and black scorching and the smoke continuously emanating from the site is a clear indication of a White Phosphorus warhead. This is obvious when comparing to known WP impact sites (example1, example2).
Brown Moses reports this attack was described by the locals as 'chemical'. This is common for WP attacks, due to the internal irritation the smoke causes (and is actually technically correct).

A few things to note, which will be useful later:


Item 2, the June 11 video from Adra is not correlated with any reports of a chemical attack as far as I could find (if anyone thinks otherwise, please comment). It was obviously moved from the original impact site and is described in the video as a 'chemical rocket'. Again, very notable are the dark liquid marks on the internal tube.
Given the Daraya findings, the most likely explanation is that this too was a White Phosphorus warhead. I will speculate that the black marks are the result of WP reacting with steel or paint - if anyone knows whether or not that makes sense, please share.

Item 5 is the most interesting. It is correlated with a chemical attack that was reported in Adra and Douma, affecting hundreds of people, implying this is the first real chemical attack associated with the UMLACA. However, when examining the evidence in detail, some problems arise:
There is one evidence that seems to indicate a neurotoxin in Adra, which is the convulsing dog in this video. However, convulsions may occur from many types of poisoning, and more importantly, convulsions are a very advanced symptom of sarin poisoning, meaning it is unlikely to find the dog convulsing from sarin at what seems to be hours after the attack as the cameraman is walking around.

Brown Moses further reports that a doctor who treated both Adra and Zamalka victims saw similar symptoms. This would of course be very valuable evidence if correct. If anyone can get more detail on this, it would be very helpful - Specifically reliable evidence that Adra patients suffered miosis (pinpoint pupils) or other symptoms exclusive to sarin.

Another thing that prevents me from positively identifying this as a WP attack is that the impact sites show no (or negligible) scorching. In one video the rocket was obviously dragged from a different location, but in the other two they seem to be near an impact crater, although it appears smaller than usual. Anyone has a good explanation?
Update: The UMLACA simulation indicates the rocket hits the ground with energy similar to that of a car driving 120 km/h and concentrated on a 12 cm diameter area. This results in the rocket penetrating a concrete roof, or penetrating 20-30 cm of a paved road, as shown in the image above. Since this is not exhibited in the Adra videos, I conclude that the two other UMLACAs were also moved from their original location. I am therefore not even certain there was an UMLACA attack in Adra on that day. If anyone has other evidence, please share.

Item 6 (Zamalka) is of course well researched and is a verified sarin attack. Interesting things to note in this attack are the lack of WP indications and the lack of black or brown liquid shiny markings on the tubes. Additionally, in Zamalka we see base plates with 2 holes and the metal stripes we saw clearly in Daraya.

So what do we have so far? The UMLACA seems to be an artillery rocket with an explosive warhead and a WP warhead. Only in Zamalka it was reliably associated with a sarin attack. This brought me to think that the Zamalka attack was based on the WP warhead refilled with sarin instead of WP. So I checked and found that using the same warhead for WP and Chemical is not a new thing. For example see this diagram (taken from here):

This also makes sense since chemical agents and WP have the same requirements: To be distributed well in the air, at which point they take their effect unassisted (WP burns when exposed to Oxygen). This is in contrast for example to Thermobaric weapons, which require a secondary charge to ignite the fuel after it is dispersed. Many people have speculated that the UMLACA is a Thermobaric weapon. So far, the evidence does not seem to support this theory.

Some further research found that bursting charges for WP are commonly a mix of RDX and TNT ("Composition B"). RDX traces were found in the UN report (e.g. Hexamethylenetetramine), and so was TNT (Page 30, Sample 17).

This in turn reminded me of the Russian report on the Khan Al-Assal chemical attack, which found sarin and RDX traces. Interestingly, they state RDX is "not used in standard chemical munitions". Together with their mention of a "rocket-propelled unguided missiles" that "does not belong to the standard ammunition of the Syrian army", it is possible that Khan Al-Assal was a sarin attack using an UMLACA with a WP warhead. However, this is pure speculation and more evidence and analysis is required.

So my conclusion at this point is that the UMLACA is manufactured with a conventional warhead and a WP warhead. In Zamalka the WP warhead was instead filled with sarin and used as a chemical weapon.

Did I miss anything? Please share your evidence and analysis and help me improve my conclusions.
Posted by Unknown at 2:44 AM