After examining the evidence presented so far to support the regime attack theory, I will now examine evidence contradicting it.

This story, which received wide attention, contains excerpts from interviews with three rebel sources and claims the Ghouta poisoning was a result of an accidental explosion that released chemical agents brought from Saudi Arabia.

Even if we ignore the mini-scandal surrounding its publication, this report raises some serious doubts:
A likely explanation is that some explosives accident occurred some time before the chemical attack, possibly not even near Zamalka, and the reporter heavily edited interviews relating to the incident to seem indicative of a chemical weapons accident.

So until other evidence emerges it seems like this story does not provide any evidence contradicting a regime attack.

These videos published September 16th show militants shooting one shell from a Howitzer canon, and three UMLACA rockets. One UMLACA is clearly identifiable by its distinctive tail in one video, and it is launched from a truck-mounted launcher similar to that used in previous documented UMLACA launches. In another video the tails of the two other UMLACAs are hidden but when filmed from a distance just before launch they can be seen. Additionally, they are launched from the same vehicle as the first UMLACA, and are referred by the same name ('Ababil'). The UMLACA's distinctive oversized warhead is not seen in either video, since it is inside the launcher, which is the standard case seen in previous documented UMLACA launches (Credit: Petri Krohn and Anonymous for analyzing the videos)

The cameraman says they are Liwa Al-Islam fighters targeting Assad troops in Jobar and Qaboun. He gives the date of August 21st (the date of the attack) and calls the operation "Reeh Sarsar", a term used in another video in the context of rebel chemical threats. See significant screenshots here and here (credit: Anita Hunt and Petri Krohn).

Naturally, such an incriminating video is immediately suspected as Psychological Warfare, and indeed many issues regarding its reliability were pointed out. Let's examine them one by one: 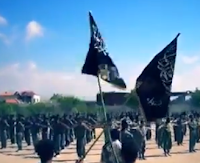 These flags (above) don't have a good screenshot.
They are better seen in the video at 3:55. 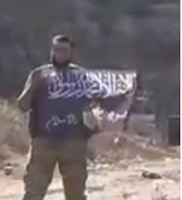 In a later post, Brown Moses added further suspicions:
Besides these, a few more problems are evident:


So what are these videos? It's still hard to tell, but here are a few options to consider:
So while these videos could prove to be helpful, they require more analysis and evidence before they can be used to determine the source of the attack.

This report mostly analyzes videos from the event and attempts to show they were staged. As it doesn't seem anyone takes this claim seriously, I will not perform a full analysis of the report, and just give my general impression:

The writers go through great efforts to point out any detail in the videos that may somehow be interpreted as abnormal, despite many other reasonable explanations. All the evidence may easily be explained as the behavior of thousands of people in panic and pain.

It additionally claims that the victims of the attack were Latakia residents taken hostage by Al-Nusra. This claim can be easily refuted: Survivors of the attack don't claim to be from Latakia, and there is no way the attack was able to just kill the hostages while leaving so many others alive and with sarin symptoms.

Hostages held in captivity by rebels reported hearing a skype call in which their captors said the chemical attack was a rebel provocation and death toll reports were exaggerated.
As with the US's 'senior official' call, and Germany's Hezballa-Iran call, it is difficult to assess the weight of this evidence without access to a recording or transcript. Specifically, speakers speculating about the source of the attack may easily be misunderstood as displaying actual knowledge.

From a probabilistic perspective: If the chemical attack was a provocation, you would expect it to be highly confidential and known to very few people. On the other hand, everyone in Syria and their mother would be discussing who is behind it, and rumors would travel all over the place. The probability that the hostages happened to hear an English skype call of the first kind and not just misinterpret the second kind is very low. When considering that the witnesses are not native English speakers and one of them specifically expressed such doubts, it is clear this evidence has no value.

Nevertheless, it is very interesting to note that senior opposition officers consider a false-flag as the likely explanation, and don't trust the death toll number.

Update: In the comments below several contributors have shown that Piccinin has strong English comprehension, and that in later interviews he described the conversation in a manner that suggests it was not misinterpreted.
However, since Quirico does not seem to agree, and we should be extra careful with evidence coming from a single source that may be interested in a certain outcome (e.g. the Al-Saket story), I will take the cautious route and keep this evidence out of the final analysis.

According to this report, upon entering Jobar a few days after the chemical attacks, the Syrian Army found materials and a laboratory for chemical weapons (Video1, Video2).

In a close examination of the videos the only relevant items I could see are the gas masks, atropine injectors and Caustic Soda (Lye) bags from Saudi Arabia. The first two could be explained as protection against external attacks and Lye has too many applications to be associated with anything specific. So unless anyone sees anything else interesting there, this does not seem to be of value.

Update: The final UN report provided a description of sarin IEDs used in the attack, which matched two items seen in the videos. This strongly indicates the location was indeed used for storing chemical weapons. Full details here.


My conclusions at this point:
In the next posts I will work on compiling all the evidence into a final conclusion.

Did I miss anything? Please share your evidence and analysis and help me improve my conclusions.