Following the enhancement of the Liwa Al-Islam videos, I analyzed them to create a map of possible locations, based on the following:
The 4 km circles (which are beyond UMLACA range) were used since the attacks are not necessarily near the town's center.

Note: These are the locations matching the claims made in the video. It may have been shot elsewhere. 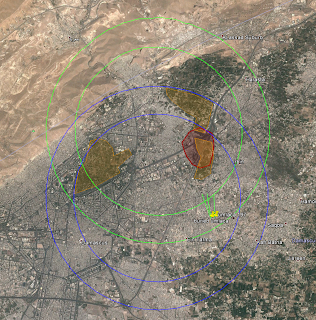 The orange areas match all three criteria, with the areas within the two inner circles representing higher likelihood. The western area is less likely since it is the border between regime-controlled area and contested-area and would mean a rocket attack coming from behind the Syrian Army.

The red area is the estimated launch source that was independently calculated from rocket impact sites.

Conclusion: Assuming this is no coincidence, it seems that the videos were shot at the location of the real source of the attack, or were fabricated by people who know it.