Other Evidence for a Regime Attack

After reviewing the three reports supporting the theory of a regime chemical attack on August 21st, I would like to examine in this post other evidence that was not included in these reports.

I'm so far aware of two reliable reports. If anyone has any more (reliable!) evidence supporting a regime attack not covered here or in previous reports, please post in the comments and I will add it here for analysis.

This is a leak from a closed meeting in which German foreign Intelligence (BND) reported intercepting a call between a Hezbollah official and the Iranian embassy in which the Hezbollah official says Assad's order for the attack was a mistake and that he was losing his nerve.

As with all second-hand Intelligence reports, it is very difficult to assess its reliability without seeing the raw information. However, in this case a simple probabilistic analysis can prove the evidence has no weight:
This is a call between two officials who are very far from any decision making or inside information regarding chemical attacks. A Hezballa official having such sensitive information would imply thousands of others (much closer to the regime) also have such knowledge, which would inevitably result in better intelligence than what we saw so far.

So this is just probably one of thousands of intercepted calls made in the area speculating about the attack, and given weight only because the speakers are associated with Syrian allies.

Testimony of the Chemical Officer of the 5th Division

According to the testimony of Brigadier General Zaher Al-Saket, he was commander of chemical warfare (in some places "chief scientific officer") in the Syrian army’s 5th division, was ordered to attack rebels with chemicals and refused. 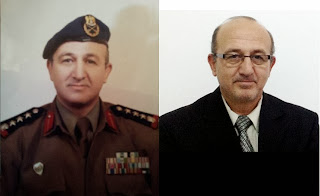 So unless there is more substantial evidence, it seems like Mr. Al-Sakat did not hold the position he claims during the civil war, and is just using his military past to help get International support for the opposition.
There are many mentions of his name in Arabic. Help of an Arabic speaker that can shed more light on this story would be appreciated.

This concludes my analysis of the evidence for a regime attack. As shown, the only evidence of any weight presented so far is the munition analysis by Brown Moses, which demonstrates with high probability that the attack on Zamalka was carried out by rockets developed and used by the regime.

I will next examine the evidence contradicting a regime attack.

Did I miss anything? Please share your evidence and analysis and help me improve my conclusions.