In his latest blog post, Brown Moses has updated two key points in his analysis of the August 21st attack:


These updates are substantial in two aspects:

While those of us who know the details, have long ignored this theory, we should remember the mainstream understanding is still heavily based on this kind of discredited evidence. So whether or not Brown Moses' updates indicate opposition culpability (he argues they do not), it is important that HRW and the Times be aware of these developments, and be allowed to correct their reports. If anyone has relevant connections, feel free to use them and let us know their response. Ideally, this would be done by Brown Moses himself.
Just to clarify: Brown Moses has never supported this theory, and based his support of government culpability on his (much more reliable) analysis of the munitions used.

As to the analysis itself, I believe it suffers from two weak points:

Brown Moses decided to replace his own trajectory analysis with those reported by the UN and Al Jazeera, which are both highly unreliable:

We have three strong indications of a northern source for the Zamalka attack. There is currently no other reliable evidence to support a different trajectory.

The impression from watching the Qaboun videos is clearly of an area that is not under firm government control. Movements in open areas are done by armored vehicles, with troops mostly operating under cover.

However, an UMLACA launch is a complex operation involving two trucks and multiple people operating in the open. In all UMLACA launches documented so far we see troops comfortably operating around the launcher unprotected. It just doesn't seem to be intended for front-line operation.

More analysis on the status of Qaboun on August 21st is ongoing and will be updated here.

Update: In the comments below Amund Hesbol analyzed news reports from Qaboun to build a map of the front line. It is still work in progress, but seems to indicate the positions suggest by Brown Moses are under rebel control. 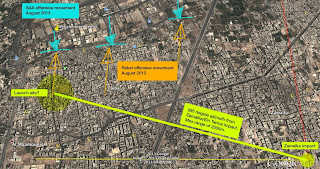 Update 2: Charles Wood prepared a map of ranges from the launch location proposed by Brown Moses. It indicates that the farthest impact sites may be beyond UMLACA range. However, it should be noted that except for sites marked UN-1 and UN-2, these were reported to HRW by local activists and were not independently verified. 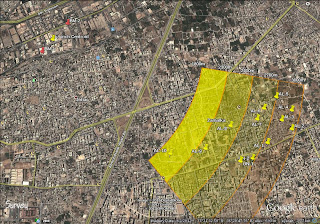 Update 3: Charles Wood went through numerous videos from this channel, and concluded the following.
"With absolute certainty all Government positions between Fares al Khouri in Jobar and 6th Tishreen South of Qabon were under sustained insurgent attack in the lead-up to August 21 and afterwards. By sustained attack, I include mortaring and sniping from positions overlooking the army base. e.g. sniping"

Last, the new theory doesn't explain why the government chose to use low quality sarin and a low-quality chemical weapon instead of the weapons they acquired and tested over the many years of their chemical program.

Conclusion: While Brown Moses' new theory addresses the UMLACA range problem, it raises other issues which make it an unlikely explanation of the August 21st attack.
Posted by Unknown at 2:42 AM