The images show many tanks scattered throughout North Jobar, some of them within Volcano range of the impact sites. This leads Eliot to conclude that “government forces were well established in the area”, and therefore the Volcano’s short distance does not contradict the regime attack scenario.

As I will show below, this conclusion is incorrect. But first, it’s worth noting that this information is not new - We already know the army was operating in the area on the 24th from several sources: 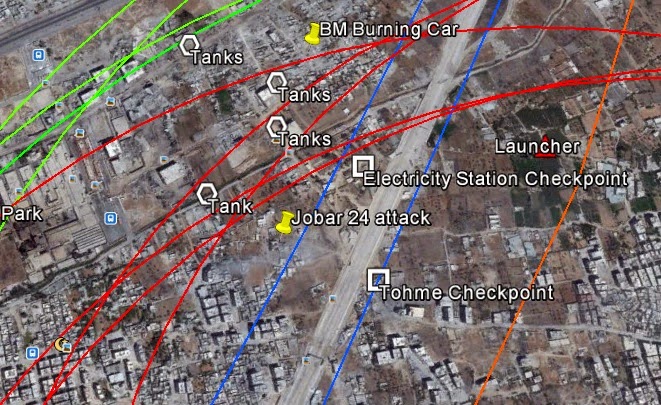 As to Eliot’s conclusion: While we can place SAA operations on the 24th within range of the Zamalka impact sites, they cannot be associated with the chemical attack, for the following reasons:


Each of the three facts above strongly contradict an SAA Volcano attack from Jobar. Considered together, they make such an attack near impossible.

There is however something we can learn from the new imagery: While there are dozens of tanks in Jobar, I could not find a single tank anywhere near the launch site, or even anywhere east of the highway (the Southern Bypass) for that matter. Furthermore, as Eliot notes in his post, the only government position east of the highway (“Tohme Checkpoint”) was wiped off the ground within days. Since we do have videos and reports of the opposition operating in the area, as well as them attacking SAA forces from east of the highway, our conclusion that the launch site was under opposition control on August 21st is strengthened.

Conclusion: The new satellite imagery from August 24th, 2013 somewhat strengthens the claim that the sarin Volcano launch site was under opposition control.
Posted by Unknown at 1:15 AM